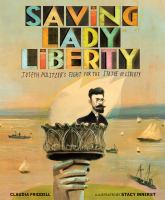 Publisher Annotation: When Joseph Pulitzer first saw the Statue of Liberty's head in Paris, he shared sculptor Auguste Bartholdi's dream of seeing France's gift of friendship stand in the New York harbor. Pulitzer loved words, and the word he loved best was liberty. Frustrated that many, especially wealthy New Yorkers, were not interested in paying for the statue's needed pedestal, Pulitzer used his newspaper, the New York World, to call on all Americans to contribute. Claudia Friddell's text and Stacy Innerst's illustrations capture this inspiring story of how one immigrant brought together young and old, rich and poor, to raise funds for the completion of a treasured national monument.