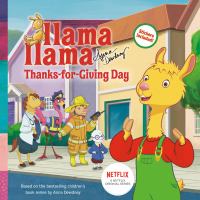 Book
When Officer Flamingo hurts his ankle, Llama Llama and his friends realize all the things he does around the town to keep them safe. And not only Officer Flamingo, but all the people who help them every day. So they come up with their best idea yet: a Thanks-for-Giving Day! Join Llama and his friends as they show their thanks to all the grown-up helpers in their life. --