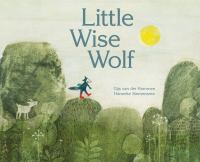 Even the wisest of wolves can have much to learn. Little Wise Wolf spends all his time reading big books and discovering new stars. So, naturally, he’s much too busy to help his neighbors. Then, one day, he’s summoned to the castle to heal the ailing king. It’s a long way, and Little Wise Wolf is unprepared for the arduous journey. Tired and hungry, he begins to doubt how wise he is, as there are many things he doesn’t know about the world. Things his neighbors know all about. But will they help him? The wisest thing of all? Accepting a little help from our friends.