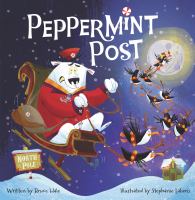 'Twas the night before Christmas, when the North Pole's Peppermint Post Office is anything but quiet! Postmaster Buck and his crew of penguins can't rest until all of Santa's letters and gifts are sorted and on Santa's sleigh. But what happens when Buck discovers a lost letter after the reindeer already left the North Pole?