Julián at the wedding 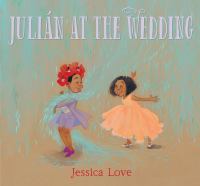 "Julián and his abuela are going to a wedding. Better yet, Julián is in the wedding. Weddings have flowers and kissing and dancing and cake. And this wedding also has a new friend named Marisol. It's not long before Julián and Marisol set off for some magic and mischief of their own, and when things take an unexpected turn, the pair learns that everything is easier with a good friend by your side"--