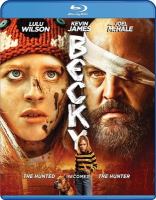 Blu-ray
Brave and rebelliou s, Becky is brought to a weekend retreat at a lake house by her father Jeff in an effort to try to reconnect. The outing immediately takes a turn for the worse when a group of convicts on the run, led by the merciless Dominick, suddenly attacks the lake house.