A time for mercy 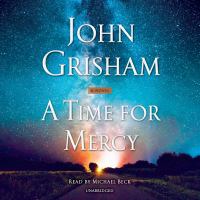 Jake is the court-appointed lawyer for Drew Gamble, a young man accused of murdering a local deputy. Many in Clanton want a swift trial and the death penalty, but Brigance sees it another way. Once he learns the details of the case, he realizes he has to do everything he can to save Drew, who is sixteen. Jake's commitment to the truth puts his career and the safety of his family at risk.