A polar bear in the snow 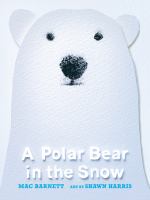 Book
"Follow a magnificent polar bear through a fantastic world of snow and shockingly blue sea. Over the ice, through the water, past Arctic animals and even a human...where is he going?"--