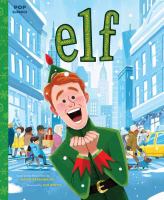 Book
"Buddy the Elf has more Christmas spirit than anyone, but he's never quite fit in with the other elves at the North Pole. Then Buddy learns that he's really a human--and his father is on the Naughty List! Determined to bring his dad some holiday cheer, he sets out for New York City. But when Santa encounters disaster on Christmas Eve, can Buddy count on his new family to help him save the day?"--