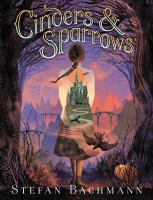 In a witch's house, nothing is as it seems. When a scarecrow climbs over the garden wall, delivering twelve-year-old orphan Zita Brydgeborn a letter saying she has inherited a distant castle, she jumps at the chance of adventure. But little does she know that she is about to be thrust into a centuries-old battle between good and evil. Blackbird Castle was once home to a powerful dynasty of witches, all of them now dead under mysterious circumstances. All but Zita, unfortunately, doesn't know the first thing about being a witch. As she begins lessons in charms and spells with her guardian, Mrs. Cantanker, Zita makes new allies--a crow, a talking marble head, two castle servants just her age named Bram and Minnifer, and the silent ghost of a green-eyed girl. But who is friend and who is foe? Zita must race to untangle her past and find the magic to save the home she's always hoped for. Because whatever claimed the souls of her family is now after her.