The bear went over the mountain 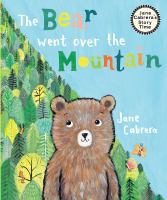 In this take-off on the familiar nursery rhyme, a series of animals looks for a missing friend until all are on the other side of the mountain, having a jamboree.