William Still and his freedom stories : the father of the underground railroad 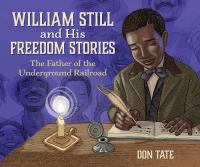 The remarkable, little-known story of William Still, known as the Father of the Underground Railroad from award-winning author-illustrator Don Tate. William Still's parents escaped slavery but had to leave two of their children behind, a tragedy that haunted the family. As a young man, William went to work for the Pennsylvania Anti-Slavery Society, where he raised money, planned rescues, and helped freedom seekers who had traveled north. And then one day, a strangely familiar man came into William's office, searching for information about his long-lost family. Could it be? Motivated by his own family's experience, William began collecting the stories of thousands of other freedom seekers. As a result, he was able to reunite other families and build a remarkable source of information, including encounters with Harriet Tubman, Henry "Box" Brown, and William and Ellen Craft. Don Tate brings to life the incredible true story of William Still's life and work as a record keeper of enslaved people who had fled to freedom. Tate's powerful words and artwork are sure to inspire readers in this first-ever picture book biography of the Father of the Underground Railroad.