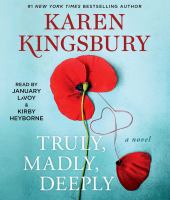 When eighteen-year-old Tommy Baxter declares to his family that he wants to be a police officer after graduation, his mother, Reagan, won't hear of it. After all, she's still mourning the death of her own father on September 11 and she's determined to keep her son safe from danger and disaster. But Tommy's father, Luke Baxter, is proud of Tommy's decision, even arranging for his son to take part in a ride-along program with the Indianapolis Police Department. Meanwhile, Tommy is in love for the first time. Annalee Miller has been a family friend for years. Their relationship is sweet and too good to be true. After prom, Tommy begins seriously thinking about asking her to marry him but she hasn't been feeling well. Days later, tests reveal the unthinkable.