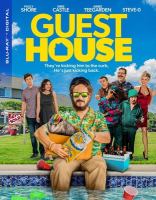 Blu-ray
Scheduled release date: November 10, 2020.
When engaged couple Sarah and Blake buy their dream home, there's a catch: a party animal named Randy in the guesthouse who refuses to leave! When Randy throws a wild, sexy pool party, the cops show up, and Blake is arrested. Can he and Sarah get through their backyard wedding without a certain loser crashing the party and ruining their marriage?