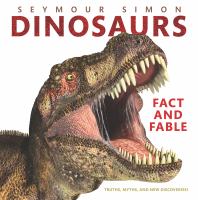 "Scientists have dug up and uncovered many facts about dinosaurs--and in the process, they have come across many myths. This picture book digs deep into the Age of Dinosaurs, covering topics such as fossilization, plate tectonics, dinosaur diets, paleontology, extinction theories, dinosaur relatives, and more!"--Provided by publisher.