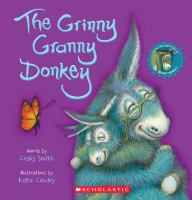 In this sequel to The Wonky Donkey, told in rhyming text, readers will meet Dinky Donkey's grandmother, who has a problem--her false teeth keep falling out of her mouth.