Dinosaurs are not extinct : [real facts about real dinosaurs] 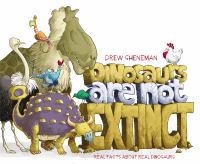 "A long, long time ago, planet Earth was full of dinosaurs. Giant dinosaurs that ate plants, meat-eating dinosaurs that walked on two feet, dinosaurs with armored frills--all KINDS of dinosaurs. Until an asteroid appeared in the sky. A big one . . . When it hit, most of the plants and animals on Earth went extinct. It was the end of the dinosaurs . . . . . . Or was it?"--