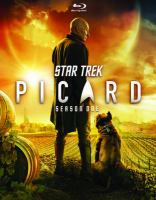 Blu-ray
Scheduled release date: October 6, 2020.
Star Trek: Picard features Sir Patrick Stewart reprising his iconic role as Jean-Luc Picard, which he played for seven seasons on Star Trek: The Next Generation. The new series will follow this iconic character into the next chapter of his life. After the destruction of the Planet Romulus, Picard sets out on a new adventure against a legion of dangerous foes, with the help of a few returning characters: Data, Riker, Seven of Nine, and a whole new crew.