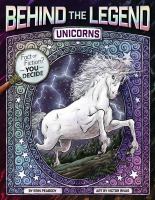 "Behind the Legend looks at creatures and monsters throughout history and analyzes them through a scientific, myth-busting lens, debating whether or not the sightings and evidence provided are adequate proof of their existence. In Unicorns, readers learn about all the sightings and "proof" of them, from stories in history of people who sought unicorns, like Julius Caesar, Genghis Khan, and Marco Polo, to why they were hunted so fiercely. This book also discusses additional history about the creatures, such as why their horns were so valued in medieval times, their presence in pop culture, and people's ongoing search for unicorns in modern times. Complete with engaging anecdotes, interesting sidebars, and fantastic illustrations, this book is one kids won't want to put down!"--