The old man and the penguin : a true story of true friendship 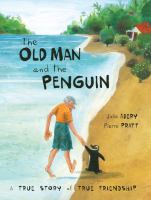 Book
This heartwarming picture book tells the true story of João Pereira de Souza, who found a Magellanic penguin covered in oil and starving near his home on an island off the coast of Rio de Janeiro. João spent a week cleaning the creature's tarred feathers and feeding him a daily diet of fish before taking him back to the sea to let him go. But the penguin wouldnt leave! He stayed with João for eleven months until finally disappearing. Now, every June, Dindim returns to de Souzas home by the sea and stays until February, and every year he becomes more affectionate and appears even happier to see his human friend.