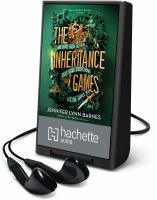 "Avery Grambs has a plan for a better future: survive high school, win a scholarship, and get out. But her luck changes in an instant when billionaire Tobias Hawthorne dies and leaves her virtually his entire fortune. The only catch? Avery must move into his sprawling mansion, full of secret passages, riddles, and codes. Unfortunately for Avery, Hawthorne House is also occupied by the family that Tobias Hawthorne just disinherited. This includes the four Hawthorne grandsons: dangerous, magnetic boys who grew up with every expectation that, one day, they would inherit billions. Heir apparent Grayson Hawthorne is convinced that Avery must be a con woman, and he's determined to take her down. But his brother Jameson views her as their grand-father's last hurrah: a twisted riddle, a puzzle to be solved. Caught in a world of wealth and privilege, with danger around every turn, Avery will have to play the game herself just to survive"--