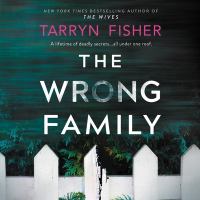 Juno was wrong about the Crouch family. She thought that they had the perfect life. But after overhearing a chilling conversation, she knows this could be her chance to make a few things right.