Above the rim : how Elgin Baylor changed basketball 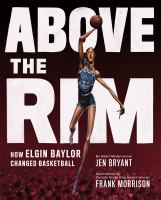 Book
"Though not as widely known as other basketball legends, hall-of-famer Elgin Baylor was one of the game's all-time greatest players-an innovative athlete, team player, and quiet force for change. A member of the early, scrappy NBA and one of the first professional African American players, Elgin (b. 1934) played in the late 1950s and early 1960s for the Minneapolis/Los Angeles Lakers, taking risks on and off the court. Known for his acrobatic style of moving and shooting, he inspired others to get creative with their game. But when traveling for away games, hotels and restaurants weren't as welcoming of Elgin as they were of his white teammates. Together, Elgin and his teammates boycotted places practicing segregation until the entire NBA followed suit. From picture book powerhouses Jen Bryant and Frank Morrison, Above the Rim is a peek into the early days of the NBA, a poetic telling of the life of an under-known athlete, and a celebration of standing up for what is right."--