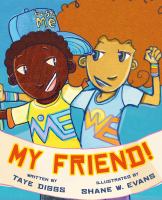 Book
Two best friends have each other's backs. When one friend sees the other doing something unkind, he steps in to show his friend the correct behavior.