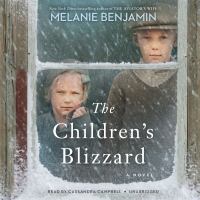 The morning of January 12, 1888, was unusually mild, following a punishing cold spell. It was warm enough for the homesteaders of the Dakota territory to venture out again, and for their children to return to school without their heavy coats, leaving them unprepared when disaster struck. At just the hour when most prairie schools were letting out for the day, a terrifying, fast-moving blizzard blew in without warning. Schoolteachers as young as sixteen were suddenly faced with life and death decisions: keep the children inside, to risk freezing to death when fuel ran out, or send them home, praying they wouldn't get lost in the storm? Based on actual oral histories of survivors, this gripping novel follows the stories of Raina and Gerda Olsen, two sisters, both schoolteachers, one who becomes a hero of the storm, and one who finds herself ostracized in the aftermath.