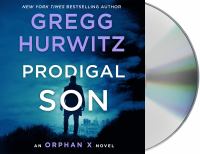 As a boy, Evan Smoak was pulled out of a foster home and trained in an off-the-books operation known as the Orphan Program. He was a government assassin, perhaps the best, known to a few insiders as Orphan X. He eventually broke with the Program and adopted a new name, The Nowhere Man, and a new mission, helping the most desperate in their times of trouble. But the highest power in the country has made him a tempting offer: in exchange for an unofficial pardon, he must stop his clandestine activities as The Nowhere Man. But then he gets a call for help from the one person he never expected. A woman claiming to have given him up for adoption. Her unlikely request: help Andrew Duran, a man who was in the wrong place at the wrong time, bringing him to the deadly attention of very powerful figures. Now a brutal brother and sister assassination team are after him and with no one to turn to, and no safe place to hide, Evan is Duran's only option.