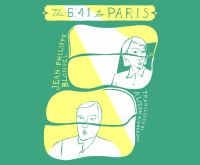 Cécile, a stylish forty-seven-year-old, has spent the weekend visiting her parents in a provincial town southeast of Paris. By early Monday morning, she's exhausted. These trips back home are always stressful and she settles into a train compartment with an empty seat beside her. But it's soon occupied by a man she instantly recognizes: Philippe Leduc, with whom she had a passionate affair that ended in her brutal humiliation thirty years ago. In the fraught hour and a half that ensues, their express train hurtles towards the French capital. Cécile and Philippe undertake their own face to face journey--In silence? What could they possibly say to one another?--with the reader gaining entrée to the most private of thoughts. This is a psychological thriller about past romance, with all its pain and promise.