Under a white sky : the nature of the future 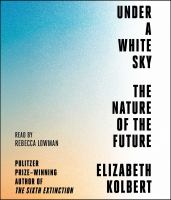 Elizabeth Kolbert takes a hard look at the new world people are creating. She meets scientists who are trying to preserve the world's rarest fish, which lives in a single, tiny pool in the middle of the Mojave. She visits a lava field in Iceland, where engineers are turning carbon emissions to stone; an aquarium in Australia, where researchers are trying to develop 'super coral' that can survive on a hotter globe; and a lab at Harvard, where physicists are contemplating shooting tiny diamonds into the stratosphere in order to reflect sunlight back to space and cool the earth.