The four winds A novel. 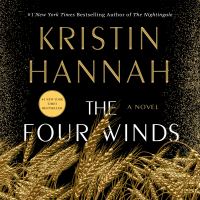 Available as a download from OWWL2go with a valid OWWL borrower card.
This program includes a bonus conversation between the author and narrator. From Kristin Hannah, the #1 New York Times bestselling author of The Nightingale and The Great Alone , comes an epic novel of love and heroism and hope, set against the backdrop of one of America's most defining eras&#8212;the Great Depression. Texas, 1934. Millions are out of work and a drought has broken the Great Plains. Farmers are fighting to keep their land and their livelihoods as the crops are failing, the water is drying up, and dust threatens to bury them all. One of the darkest periods of the Great Depression, the Dust Bowl era, has arrived with a vengeance. In this uncertain and dangerous time, Elsa Martinelli&#8212;like so many of her neighbors&#8212;must make an agonizing choice: fight for the land she loves or go west, to California, in search of a better life. The Four Winds is an indelible portrait of America and the American Dream, as seen through the eyes of one indomitable woman whose courage and sacrifice will come to define a generation. A Macmillan Audio production from St. Martin's Press "Hannah ( The Great Alone ) brings Dust Bowl migration to life in this riveting story of love, courage, and sacrifice .... combines gritty realism with emotionally rich characters and lyrical prose that rings brightly and true from the first line ." &#8212; Publishers Weekly, starred review "Through one woman's survival during the harsh and haunting Dust Bowl, master storyteller, Kristin Hannah, reminds us that the human heart and our Earth are as tough, yet as fragile, as a change in the wind." &#8212; Delia Owens, author of Where the Crawdads Sing