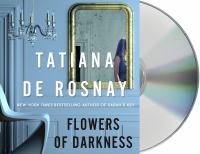 CASA is a brand new artist residency in an ultra-modern apartment, with a view of all of Paris. A dream for any novelist in search of tranquility. But is this residency a dream or a nightmare? Since moving in, Clarissa has had ominous discomfort, the feeling of being watched. Who is behind CASA? Is Clarissa right to be wary or does she too easily give in to paranoia, falling victim to an overly fertile imagination? Meanwhile, Clarissa is still haunted by the betrayal that led her to divorce.