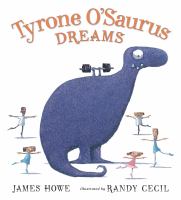 Book
"Tyrone has a dream. But it seems like everyone else has their own dream for Tyrone. Should he be a dentist? A lawyer? A football player like his brother Johnny? None of these things make Tyrone happy. But then he meets the strongest dinosaur he's ever seen, who inspires him to follow his own heart and become a dancer-like her. The creators of Brontorina reunite for a captivating companion story about a young dinosaur who, with a little love and encouragement, finds the courage to dance his way into his dreams"--