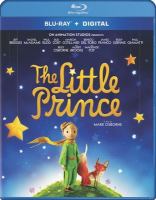 Scheduled release date: February 9, 2021.
From the two-time Oscar nominated director of Kung Fu Panda comes this critically acclaimed, re-imagined take on Antoine de Saint-Exupery's classic story. At its heart is 'The Little Girl,' prepared by her mother for the very grown-up real-world. After her eccentric, kind-hearted neighbor, 'The Aviator' introduces her to an extraordinary world where anything is possible, she learns of 'The Little Prince.' And so begins the magical and emotional journey where one learns, amongst other things, it's the human connections that matter most.