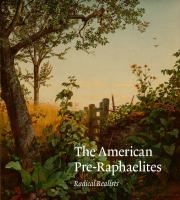 Book
Bringing together insights from a distinguished group of scholars, The American Pre-Raphaelites: Radical Realists examines the history and legacy of this often-overlooked group of American artists who were profoundly influenced by John Ruskin (1819-1900), the most influential art critic of the Victorian era, and his call for a revolutionary change in the practice of art--to leave tradition behind, exit the studio, work outdoors, and reproduce nature's "truth" with exacting detail. Published in celebration of Ruskin's two-hundredth birthday, The American Pre-Raphaelites includes some eighty works by Thomas Charles Farrer, Fidelia Bridges, Charles Herbert Moore, Henry Roderick Newman, and William Trost Richards, among others. New research reveals that many of these artists sought reform not only in the practice of art, but also in the broader political arena--many were abolitionists, and Farrer himself had served in the Union army. They followed Ruskin's dictum to record the natural world with strict fidelity, but they also created works of stunning beauty that often include a rich political subtext.--Provided by publisher.