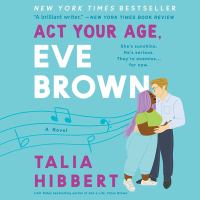 Eve, the flightiest Brown sister, finds it's time to grow up and prove herself, even though she's not entirely sure how. But when she crashes into the life of Jacob Wayne, an uptight B&B owner, she has him falling hard, literally. Now his arm is broken, his B&B is understaffed, and the dangerously unpredictable Eve is fluttering around, trying to "help." Before long, she has infiltrated his work, the heat between them is impossible to ignore, and it might just be melting Jacob's frosty exterior.