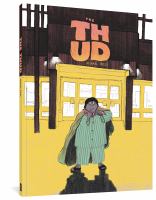 "When Noel's mother has a stroke, his world is turned upside down. Especially when a man comes, who tells Noel that he can't stay in the only home he's ever known. He has to move from his apartment and his city to some kind of care facility, in a town he's never heard of. For the first time, Noel is on his own. Who can he trust? Who can he love? There is a village in Germany called Neuerkerode that is largely populated and run by people with developmental disabilities -- the local restaurant, the local bar, the local supermarket. It's a beautiful, even incredible place -- and it's where The Thud takes place. In 2016, cartoonist Mikael Ross began visiting Neuerkerode. Over the course of two years, Ross learned about the people who live there and listened to their stories. As Neuerkerode Protestant Foundation Director Rudiger Becker has stated, Out of this has arisen a powerful piece of literature that depicts, with a rarely seen intensity and authenticity, the lives of people with intellectual disabilities. Told from Noel's perspective with humor and empathy, The Thud offers a rare window into the life of a boy living with developmental disabilities. In doing so, Ross has crafted an enchanting story that helps us understand the often misunderstood."--Provided by publisher.