A burst of firsts : doers, shakers, and record breakers 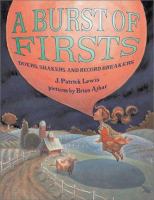 Book
A collection of poems that celebrate such notable firsts as the first American woman in space, the first king of rock 'n' roll, the first man to run a four-minute mile, and the first person to create blue jeans.