Walking toward peace : the true story of a brave woman called Peace Pilgrim 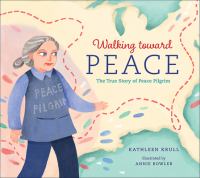 "Tells the true story of Peace Pilgrim, a female activist and spiritual leader who sacrificed everything to travel by foot around America promoting peace"--