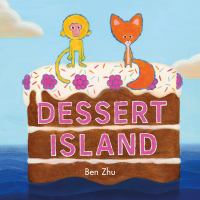 Monkey is stuck on an island made of desserts, and Fox on one made of dirt and rocks, but as time passes, fortunes change and they learn about sharing and caring.