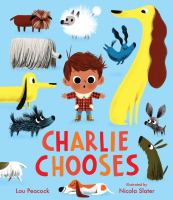 "Charlie has a hard time choosing. It doesn't matter if the choice is between flavors of ice cream, pairs of underwear, or whether to sleep with the lights on or off, the options are always overwhelming...However, with Charlie's birthday fast approaching, he is determined to choose the absolute best gift for himself: a dog! And when a furry friend chooses him instead, making decisions suddenly becomes a little bit easier"--