Killing the mob : the fight against organized crime in America 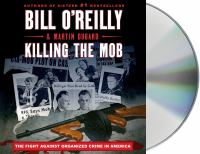 O₂Reilly and co-author Martin Dugard trace the brutal history of 20th Century organized crime in the United States, and expertly plumb the history of this nation₂s most notorious serial robbers, conmen, murderers, and especially, mob family bosses. Covering the period from the 1930s to the 1980s, O₂Reilly and Dugard trace the prohibition-busting bank robbers of the Depression Era, such as John Dillinger, Bonnie & Clyde, Pretty Boy Floyd and Baby-Face Nelson.