Darwin's rival : Alfred Russel Wallace and the search for evolution 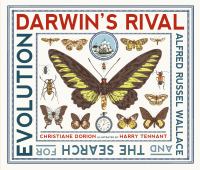 Follow Victorian naturalist and explorer Alfred Russel Wallace on his intrepid journeys across the globe and find out how he developed his own theory of evolution in this beautiful illustrated gift hardback. In 1858, Alfred Russel Wallace's travels in the Amazon Basin and Malay Archipelago led him to discover natural selection independently of Charles Darwin. Darwin's Rival traces Wallace's life from his childhood in the Welsh countryside to his rise to prominence among the scientific community, via dense tropical jungles and perilous journeys -- and shines a light on one of the most important contributors to the theory of evolution.