How to be cooler than cool 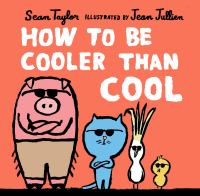 Book
"Follows a savvy little chick who shows all the other animal poseurs on the playground that being cool means just having fun."--