The Bad Guys in Cut to the chase 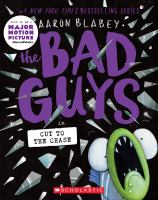 "A mysterious doorway! (Sure, it's in the grossest restaurant in the world, but that doesn't make it any less mysterious, OK?) Behold! What lies beyond?! An evil centipede? An alternate universe? A few decent explanations? VRRRING! NING! NING! Hey, was that a CHAINSAW?! Let's see if you can read and run at the same time... GO!"--Page 4 of cover.