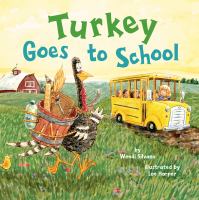 "School is starting soon and Turkey can't wait. Each day, he and his barnyard friends practice their writing and math. But when the school bus rolls up, they are booted off. It turns out that animals aren't allowed to attend school. Pig calls it hogwash, and Turkey agrees. All he has to do is find a way to show the students and the principal that turkeys--and their friends--do belong in school. With a gobble, gobble here; a gobble, gobble there; and a few clever costumes, he just might"--Jacket.