Do I know you?  : a novel of suspense 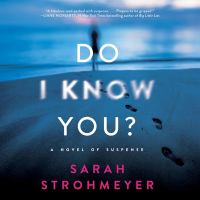 Jane Ellison is a 'super recognizer' able to identify strangers by the slightest facial details...When she spies human rights activist and heiress Bella Valencia in a crowded Boston airport, Jane's convinced she's found the person responsible for her sister Kit's disappearance...Jane is ready to risk everything for the chance to publicly expose Bella's crimes at her upcoming celebrity wedding. But the more she digs into what happened that night, the more she questions her own assumptions