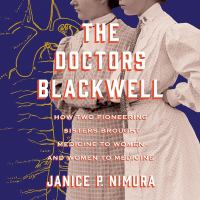 "The vivid biography of two pioneering sisters who, together, became America's first female doctors and transformed New York's medical establishment by creating a hospital by and for women. Elizabeth Blackwell believed from an early age that she was destined for greatness beyond the scope of "ordinary" womanhood. Though the world recoiled at the notion of a woman studying medicine, her intelligence and intensity won her the acceptance of the all-male medical establishment and in 1849 she became the firstwoman in America to receive a medical degree. But Elizabeth's story is incomplete without her often forgotten sister, Emily, the third woman in America to receive a medical degree. Exploring the sisters' allies, enemies and enduring partnership, Nimura presents a story of both trial and triumph: Together the sisters' founded the New York Infirmary for Indigent Women and Children, the first hospital staffed entirely by women. Both sisters were tenacious and visionary; they were also judgmental, uncompromising, and occasionally misogynistic--their convictions as 19th-century women often contradicted their ambitions. From Bristol, England, to the new cities of antebellum America, this work of rich history follows the sister doctors as they transform the nineteenth century medical establishment and, in turn, our contemporary one"--