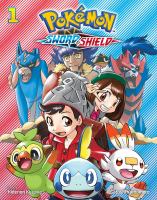 Awesome adventures inspired by the best-selling Pokémon Sword & Shield video games set in the wild Galar region! Casey Shield, a hacker who invented the Dynamax Simulator, and Henry Sword, a boy who repairs gear for Pokémon, both dream of entering the Galar region's gym battles. For Casey, it's a chance to reunite with her lost Pokémon. For Henry, it's an opportunity to search for the legendary Rusted Sword and Rusted Shield. Casey and Henry can't enter Galar region tournaments without the support of the local champion, Leon! But with train disruptions, Team Yell and wild Dynamax Pokémon getting in their way, will they ever get a chance to impress him?! Who's going to get these wandering Wooloo off the train tracks?