A history of underwear with Professor Chicken 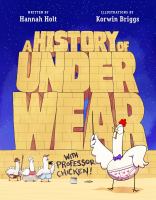 From Paleolithic loincloths to Henry VII's wives wearing underwear on their heads and beyond, this hilarious--and accurate--history of underwear (as comically modeled by chickens), tells the fascinating story of our most private clothing.