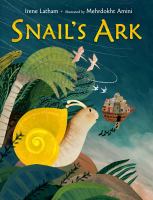 Book
In this gorgeously depicted and timeless story of friendship and perseverance, two snails journey to the ark.When Esther woke she knew something curious was happeninǵa storm was in the air. Not just any storm but the biggest storm the world had ever seen. In lyrical and rhythmic text, with a common refrain of℗hurry hurry, Esther makes her way to the ark, encountering other animals along the way. Joys, troubles, and journeys are best shared, and so Esther finds her friend Solomon and togetheŕwith the help of a small miracléthey find a way to safety.This heartwarming picture book celebrates the importance of community and helping others, featuring two brave snails who embark on the journey of a lifetime.