A tale of two guns 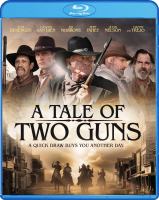 Blu-ray
In the lawless West, The Cowboys—a notorious brotherhood of killers and thieves—reigned over the land with brutal fists and fast guns. Fate had finally caught up with them...and now the merciless gang has but a single surviving member. When a deputized gunslinger takes up the call to hunt down the last Cowboy, the chase is on and the bullets fly - and only one of these hardened men can survive. Tom Berenger, Casper Van Dien, Ed Morrone, Jeff Fahey, Judd Nelson, and Danny Trejo star in this gritty Western from director Justin Lee (Hunters).